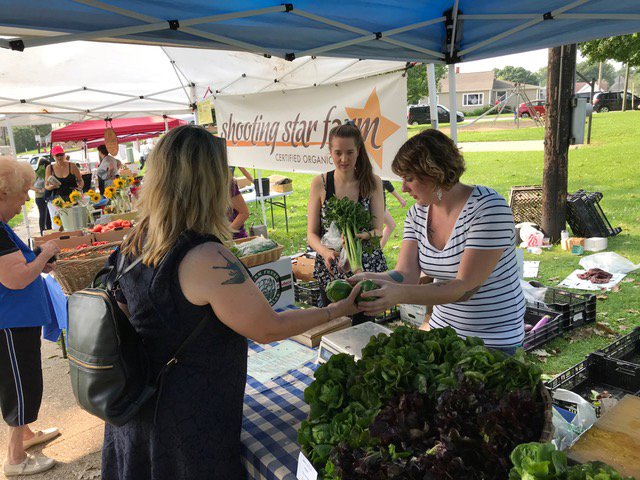 In August I spent a Saturday with Kriss Marion. Marion is trying to unseat incumbent Republican Sen. Howard Marklein in a southwestern Wisconsin district that could determine which party controls the state Senate come January.

I wrote about her unusual campaign in an Isthmus cover story, but she and her campaign manager, Anna Landmark, are such interesting women that there was a lot I had to leave behind even with my 3,000 word limit.

One story from that day that I keep thinking about is how Marion approached a hostile voter. We were at the Boscobel farmers’ market and she was working the line of vendors. She had just finished talking with a woman who was strongly supportive when she moved on to a vendor selling leather goods.

I was observing from a picnic table a safe distance away, but I figured this couldn’t be good. It’s always a bad idea to judge a book by its cover, but this guy didn’t look like a Democrat. Sure enough he stiffened as Marion approached him and grunted some unfriendly greeting when she began to make her brief pitch.

His response was to go off on his belief that public university students should not be allowed to major in the humanities, social sciences or anything that wasn’t likely to lead directly to a productive job. It was the education-as-trade-school view, which is pretty much Gov. Scott Walker’s philosophy.

The old pol in me wanted to rush over to Marion and remind her of that very important meeting she had in two minutes. I could tell that she was wasting time with a voter that she had no chance of pulling into her camp.

But my job was to report on her campaign, not be part of it. So, I just sat 20 feet away and I took it in. Marion listened without interrupting and then used his comment as a chance to pivot and talk about her support for rural schools and her economic development agenda, which had to do with bringing high speed internet to the area, encouraging more farmers’ markets like the one he was at, and protecting water quality.

It was almost noon and she talked while he packed up his goods and moved them to his truck. The man did not smile. Ever. I guessed that he enjoyed being in his workshop tooling his leather goods, but the retail part of the business was not so much in his blood.

Still Marion persisted. She kept trying to make some connection with this guy. The painful encounter went on for about 10 minutes at the end of which the guy took her literature. I estimated that she moved him from maybe getting his vote when hell froze over to getting it when hell got extremely cold.

Later at lunch she explained that hers was a district that was neither red nor blue, an independently minded chunk of the state that had been represented by Republican maverick Dale Schultz before electing the predictable conservative Marklein. A place that had voted for Barack Obama twice and then went for Donald Trump only to switch back to liberal-backed Rebecca Dallet in last spring’s Supreme Court race.

Basically, she was telling me that a candidate in her district can’t afford to give up on any voter. And in that I found hope.

Politics in this country has rapidly degenerated into all-out tribal warfare. Everyone talks about the base. This game was once about addition, but now it’s about multiplication. Rather than starting with a base and then reaching out to others to add to it, the strategy is to energize your base more than the other one. That argues not for moderation, which might cool the base, but for more and more red meat. And since negative emotions are stronger than positive ones, it means painting the other side as people who are just this side of ax murderers.

But by nature Marion doesn’t seem to be a tribal warrior. She calls herself a “small government Democrat.” She campaigns on sensible regulation that protects things like drinking water while laying off on onerous requirements for small businesses, like home bakers.

Marion seems like the kind of quirky, unpredictable candidate who just might play well against the button-down, party-line, professional accountant Marklein. If she can overcome a massive funding disadvantage she could be the Democratic equivalent of Schultz.

I finished my day with her (her day went on into the evening) at a fundraiser where she told supporters that she didn’t want to go to Madison to take over, but to work with the other side. That was consistent with what she had been saying all day as I followed her around the district.

It occurred to me as I listened to her that Marion is the kind of candidate we could get more of if we had more competitive districts, where the middle actually mattered again and where gentle persuasion worked at least as well as bitter resentment.